We Give Up! (AKA Changes to the Request system)

Deprecated function: The each() function is deprecated. This message will be suppressed on further calls in menu_set_active_trail() (line 2375 of /home/bucknuck/public_html/includes/menu.inc).

It's been almost three years since we opened our doors here at Bucknucks. In that time we have accepted four thousand six hundred and twenty three requests for books (4623). Of those, we have managed to fill nine hundred (900) requests.

That is roughly one in five requests that is being filled, or 20%. It has been a while since I was in school, but I believe that is a failing grade. This is an area we need to get better.

I know that some of the requests we have unfilled are in our store now, sitting on the shelves, unknown to us. I have discovered that even my magnificent brain (sarcasm alert!) cannot remember over three thousand requests. It's just not possible. We review the requests periodically and find books and phone people, but it's marginally sucessful at best and haphazard at worst.

Part of the problem is the sheer magnitude of the task, but another problem is the age of the requests. If a request is more than a few months old, often the person has already sourced the book elsewhere, or they forgot that they even wanted it, or they have moved. Phoning a person for a two year request is often embarrassing, particularly when they cannot remember wanting the book in the first place. On a personal level it makes me shy away from the task as a whole, which isn't good.

Sometimes books are popular and everyone goes out and reads the book, then the books start coming in here to Bucknucks, but the requests are numerous, so we go to the oldest first. We leave messages and bother people who have already read it, and in the interim the recent requests are getting older. We can receive a Request for a book in January, and also receive that book the same month, but we spend so much time calling the older requests, that even if no one wants the book anymore, it could be a few months before we get to you, and by then you may have already gotten the books elsewhere.

There is a lot of time wasted trying to fill very old requests, and a resulting lack of focus from the scope of the task. A lot of time, very little benefit for customers, and it's creating problems. Sounds like we have to rethink this.

And so we have.

We figure that if we only focus on requests from the last ninety days (three months) then we will be able to improve upon on our 20% success rate.

In essence there is a ninety day expiry on your request. You are welcome to re-request the book you are after at any point. Hopefully you won't have to do that too much before we find it.

If you ever have any come in I would like them. If I find them in the meantime I will let you know.   Cheers!
I remember all this in the library system before computers and we had catalogues! This is a more than fair way of handling it and I might make it less time in fact You do such a great job that requests are a bonus but not necessary However I love the Artist's Way so if you see one I want it LOL 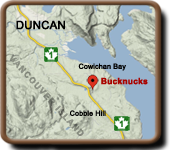 Our Cowichan store is located behind the Country Grocer on Highway 1, to the right of the stairs, and under South Cowichan Physiotherapy.